The EIDXG Summer Challenge 2020 begins on June 1st at 00:01 UTC and ends on Sunday 30th August at 23:59 UTC.
Open to everyone. All you need to do is to work as many unique DXCCs, CQ Zones, participating EIDXG members and as many of the 32 EI/GI Counties as possible.
Each counts just once, regardless of which Band or Mode you work it on. Example: Your first KL7 QSO will give you 1 point for Alaska and another point for Zone 1. If you work another KL7 station on a different Band or Mode it doesn’t give anything additional. If you work 10 stations in county Dublin for example, you get the point for your first QSO with Dublin only. If you work Declan EI6FR on 20m CW, you’ll get 1 point as he is an EIDXG member. You do not get any additional points if you work him on different Bands or Modes. If you work Hal W8HC, you get a point as he is an EIDXG member…etc..

)  and mark off each one as you work them. Alternatively, why not print them off and have them next to your radio for convenience.
There will be winners in the following categories:
EI/GI,
Europe,
Rest of World
..plus Bonus prizes!
In the event of a tie (stations with same score), the Winner will be the one who worked their last counter in the least amount of time.
Your ADIF or Cabrillo log to be submitted to challenge@eidxg.com no later than September 6th. Include your claimed score and full postal address address.
Winners announced at ‘DX Féile 2020‘ on October 3rd.
Organiser’s decision is final in all matters regarding this event.
Enjoy the chase!
Please feel free to leave a comment on our Facebook post  or share with a friend as this is open to ham radio operators worldwide.
Please follow and like us:

Discussions began little over a year ago to set up a new DX Group in Ireland that would have the sole interest in ‘Everything DX’, with a primary focus on establishing an all ‘Echo India’ DXpedition team. To date, several meetings have taken place and the group have firm plans secured for a major DXpedition to take place early next year – Nepal 2017 as 9N7EI
At a previous meeting, it was decided that the group’s 1st exercise would be to participate in the IARU contest which takes place each July. This would be an ideal opportunity for the whole group to get involved in working together as a team and also to for us to test various antennas, filtering, networking etc. Immediately, there was huge interest amongst the group and a very strong team was soon formed. Thus, our intention was to replicate and simulate a DXpedition environment and to set up no fewer than 7 stations, all within the same operating site.

Garbally College in Ballinasloe was the obvious choice and with thanks to EI4CF & EI9HX this venue was arranged. A few phone calls later, and with the help of EI7GY, we had secured the exclusive use of the EI0HQ callsign and would be representing the IRTS as the National Head Quarter station of Ireland.

The IARU contest is an International contest where all licensed amateurs worldwide are eligible to participate. The objective of this contest is to contact as many other amateurs as possible on both SSB & CW, especially IARU member society HQ (Head Quarter) stations from all 3 IARU regions using the 160, 80, 40, 20, 15 and 10 meter bands. Multipliers are the total number of ITU zones plus IARU member society HQ stations worked on each band (not mode). Thus, your Society’s HQ stations participation is very important for the multipliers. This year’s contest took place from UTC 12:00 Saturday 9th July to UTC 11:59 Sunday 10th July 2016.

Plans soon turned to what equipment would be used and on what equipment we had available. Between the participating EI DX Group members, a vast amount of equipment was ready for the offering, ranging from multiple amplifiers, band pass filters, antennas, masts, coax etc… To keep the logging & networking all the same, the group purchased 8 identical laptops and with thanks to Enda EI2II, were all networked and were running N1MM+. As with all operations, there is never a shortage of radios, it’s the other ancillaries that are usually required. In this case, we had everything. Remarkably, all radios produced for this event were all Icom and ranged from the IC7600, IC7400, IC756 to the newest IC7300 SDR radio.

To maximise our QSO count, we needed to be QRV on both CW and SSB on each band at the same time! If there was to be a 10m opening for example, it needed to be exploited as this kind of opening usually disappears just as soon as it occurs. It could easily be missed and the old saying ‘ You snooze-you loose’ comes to mind! At the same time, it’s pointless in CQing on 160m during hours of daylight for example, so it was decided that the 10m station would also become the 80m/160m station and would have the capability of operating on both CW & SSB. A compromise, yes, but this was to be more of a training exercise rather than a serious contest entry. Without a competitive 160m receiving antenna, all we planned on was working our few European neighbours on top band anyhow. All the other 6 stations were to be in fixed positions, separating the CW positions from the SSB positions.

As mentioned earlier, there was a lot of interest amongst the group in this event and very soon we had compiled a list of 16 operators all willing to arrive on the Friday and to help with the stations set-up. There were a lot of antennas to be erected and coax cables to be run! We were to have 7 separate operating positions and a multitude of antennas.

Friday morning, team members all left various parts of the country to begin their journey to Ballinasloe. Some had to travel further than others, more brought caravans and trailer towers, but soon enough, a large proportion of the group were on site.

This venue was already surveyed by some of the group in the Spring and so we already had a plan of action. To be fully independent, we decided on doing this whole operation on generator power. With all the current that would be needed to run our amplifiers, a large diesel generator was hired and was soon to be delivered. An impressive power distribution board was built by Pat EI9HX with separate trip switches for each power outlet. Each station position was to have it’s own outlet. All stations were set up in the main sports hall and had full WC / shower facilities along with ample upstairs space for sleeping quarters. 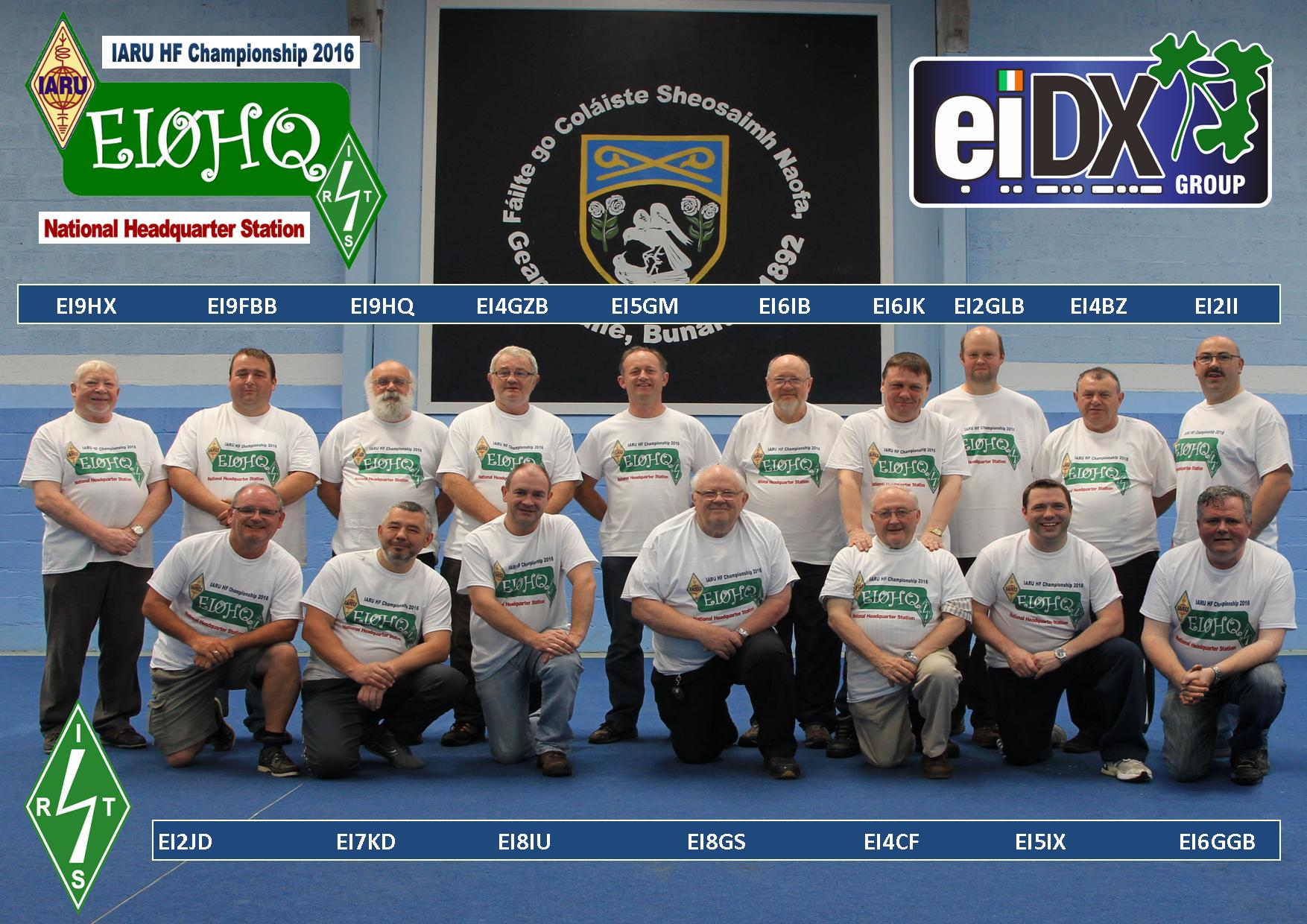 After a busy Friday, the group retired at about 8pm and visited a local restaurant in the town. This was a welcome break and much needed refreshments after a hard day of setting up. We still were not finished but as the contest starts at 13:00 local on the Saturday, we still had a few hours available on the following morning.

As with most contests, the hours before are rather frantic, what with finishing the antenna set up, powering everything on, testing etc… Band conditions were rather lousy however and just 1 hour before the start of the contest, the A index was at 23! After all our hard work, this would turn out to be a 20m contest! It’s always challenging to compile a roster or operating schedule to keep everyone happy – some don’t like getting up at 4am for example! However, when on a DXpedition this is exactly what happens as all shifts must get covered. Quite often, it’s during these shifts when the band begins to open and when real DX can be worked.

The sports hall was buzzing with excitement for the minutes before the contest start. After a short team briefing and the much anticipated handout of the team Tee-Shirts, each operator was soon in his position, tuning and trying to find a good spot to start CQing. With the advancement in technology in recent times, this is much more difficult for the SSB guys to get spotted on the DX clusters. The CW stations soon get spotted and picked up by the skimmers and reverse beacons and soon nice pile-ups begin. It’s important at this time for the SSB stations to try to find a good clear frequency. The countdown started and soon all 7 stations began calling CQ.

The following minutes were spent rushing around fixing some issues and minor glitches. There was the inevitable bit of stray RF going around and Murphy was in attendance too, however, once we learned what we could and couldn’t do, everyone soon found their rhythm. Each shift was for 3 hours with 6 hours of off time. Some opted for extra shifts and operated both modes. Despite any initial issues, each station was manned and we had a real strong presence on the bands…we were on 10m, 15 CW & SSB, 20 CW & SSB, 40 CW & SSB all at the same time! SSB was a struggle on some bands, propagation wasn’t co-operating. CW definitely is the better mode and gets through where SSB doesn’t. Still though, by having 7 stations all QRV at the same time racks up the QSO count fairly quickly. We did not have a multiplier station. As a HQ station, it’s much more important to be running so the hoards can come and get us instead! Although we are allowed 1500W for this contest, each station ran anywhere between 400 – 800 watts.

We also had some special visitors to our station. Liam EI7DSB, John EI5HDB & Ronan EI5HRB all travelled up from Limerick as did Richard EI5GUB from Co. Longford. From the other side of town, Enda EI5GMB & Maurice EI5BLB popped in to say hello too and even our Vice-President Jim EI4HH, travelled from Dublin and got rostered with a CW shift for his troubles!

Right from the beginning, this was a training exercise, an opportunity to get to know each other along with our equipment. We were never going to be competitive amongst the big contest stations. DA0HQ and GR2HQ for example, operate this contest from several mega fixed-site contest stations scattered all around the country, all of which have evolved through the years. As a HQ station there are no restrictions on antennas, so….imagine doing this contest from EI7M, EI1Y, EI9E etc..all at the same time! What we did try to do was to set
a new EI record and although a little early for the actual official results…..it seems that we did! Overall, we finished off with over 4,500,000 points, with an impressive 5,352 QSOs…all in 24 Hours!

The whole team meshed incredibly well and a great weekend was had by all. Each played an important part and proved invaluable to the group. Talks have already begun for a repeat again for next year. Special thanks to the 11 EI’s who made it into our log, to DA0HQ for being the only station to work us on all 12 possible band/mode slots, to Fergus EI6IB for all his help, to Pádraic EI5IX who travelled from the UK to participate with us and to Dave EI4BZ whose work is just about to begin as QSL manager! We are most grateful to all at Garbally Collage for the use of their excellent facilities and kindness.
Vy 73 de Dave EI9FBB